WHY YOU MUST VISIT THE FARNE ISLANDS, NORTHUMBERLAND

A visit to Farne Islands has been on my list for quite some time. We decided to spend the second May Bank holiday weekend in Northumberland.

The plan was to visit the Farne Islands as well as the Holy Island of Lindisfarne. We headed to Northumberland on Friday evening and on Saturday we got up early and drove to Seahouses for our boat departure to the Farne Islands.

The Farne Islands are a group of islands off the Northumberland coast in England. There are 15 islands at high tide and 28 islands at low tide. They are divided into two groups, the Inner Group and the Outer Group.

The islands are owned and protected by the National Trust. As well as being the most famous Sea Bird Sanctuary in the British Isles they also have a large colony of Grey aka Atlantic Seals.

There are a few boat companies operating trips to the Farnes. These include Serenity, Billy Shiel’s Farne Island boat trip and Golden Gate.

We chose Billy Shiel’s Boat Trip. The Williams family have been taking visitors to the Farnes since 1918, and have had several members of the Royal Family aboard. I chose it mainly for its easy online booking. We bought the All Day Birdwatch Trip.

We were staying at Alnwick Youth Hostel which is about a half an hour drive from Seahouses.

Seahouses is where you board the boat to Farne Islands. If you want to stay somewhere closer, there is plenty of accommodation around Seahouses. We parked at the car park just next to the seafront. As we had already bought the tickets online we went straight to Billy Shiel’s Kiosk to check in. Their kiosk is situated just next to the car park.

The boat was full. Completely full of the UK and international tourists, bird enthusiasts and photographers. It made me wonder how much money there was on the boat in all the photographers’ equipment. Definitely a few thousand.

We sat right at the edge of the boat and slowly got used to the waves. Soon after the departure, we could see thousands of birds enjoying themselves on the sea.  What an amazing experience already! At this point, I knew it would be a good trip.

Uniquely, there are some 100,000 pairs of breeding birds including Guillemots, Kittiwakes, Razorbills, Shags, Eider Ducks and four species of Terns. Moreover, you can come across to 70,000 Puffins, my favourite sea birds.

They come to land only to nest, spending the rest of its life at sea. Dark brown and white, not as black as the similar razorbill, it has a ‘bridled’ form with a white ring round the eye and stripe behind it.

First and foremost, our boat stopped near the cliffs. It was amazing to watch the grey seals also known as Atlantic seals to lounge about. They are just too cute. Read about 10 facts about the Farne Islands’ seals here.

We saw the Lighthouse from the boat. You may have heard a story about Grace Darling. On 7th September 1838  Grace Darling and her father rescued nine survivors from the paddle steamship  Forfarshire which ran aground on Big Harca in stormy seas. Our son was excited as he learnt about Grace at school.

Longstone Lighthouse was manned for 164 years before automation was introduced in 1990.

Our first stop was Staple Island. At the time of boarding the boat,  the captain announced that it was 50:50 chance of landing at the Staple due to the rough sea swell. There is no proper jetty on the island like on the Inner Farne. Therefore it makes it more difficult to land and you basically have to clamber off the boat and onto the island via stone steps while national trust wardens and boat crew give you a helping hand.

A couple who was sitting next to us said that it was their 3rd visit to the Farnes and they have never been lucky to land on Staple Island. We were so happy to find out that we would be landing. Yay, it was our lucky day!

Although a little bit more rugged and inaccessible than Inner Farne, Staple Island is well worth a visit.

There are many puffins nesting in burrows and flying in and out of the sea to catch food for feeding their baby puffins called pufflings. These comical creatures are easily recognisable by their brightly coloured bill, red and black eye-markings and bright orange legs. I just love them.

Did you know that they can flap their wings around 400 beats per minute? It all pays off in the end, as they can reach speeds up to 88 km per hour!

The cliffs on Staple Island are also full of guillemots, kittiwakes, razorbills and occasional fulmars. 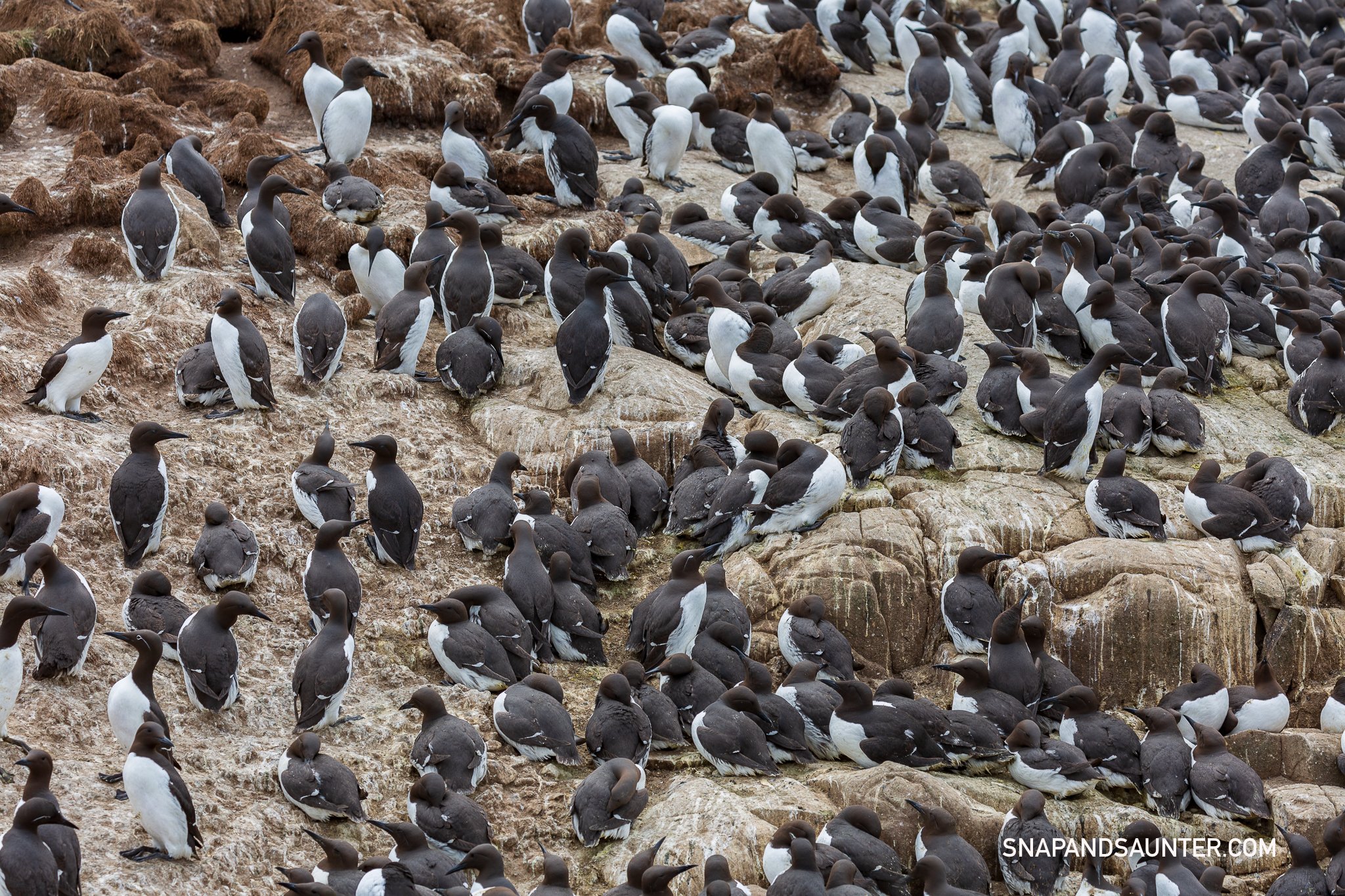 Almost gull-like, these grey and white seabirds are related to the albatross. Mating for life, they don’t make a nest but lay their egg on a safe ledge. Be careful not to get too close as they will eject a potent smelling oil if threatened.

After two hours spending on Staple Island, our boat returned to take us to Inner Farne.

We landed on the Inner Farne just in time for our packed lunch at 1:15 pm. Note that there are no toilet facilities on Staple Island so we headed to the visitors’ centre first and use their facilities. But it was at a cost. Going through the nesting Arctic Terns towards the visitor centre who dive-bomb at you and peck your head was like going through a warzone. That’s no exaggeration!

Apparently, they go for the highest thing, so I and Cedric were crouching alongside Oliver who is quite tall :-). We have been advised to hold something above our heads, so Oliver found a pencil case in his rucksack.

Nevertheless, we all got pecked once! It actually hurt quite a bit and, in some cases, they can draw blood! Poor little things, they only want to protect their eggs or chicks. So please be careful, and most definitely wear a hat!

Arctic terns are the ultimate long-distance migrants. Summer visitors to the UK and winter visitors to the Antarctic. They are also long-lived birds, with many reaching fifteen to thirty years of age. Here I took a photo of some acrobatic terns. 🙂

Stunning birds, with their emerald green eyes, are similar to cormorants but smaller. In the breeding season, adults develop a dark glossy green plumage and prominent recurved crest on the front of their head.

Here is one with a chick.

At 3:15 pm it was time to leave Inner Farne and head back to the harbour at Seahouses.

This trip was a truly amazing experience and I am so glad we decided to do it. It is fascinating to see and hear so many birds at one place so close up. Not to mention that a boat trip, two islands, lighthouses, many birds and seals in one day were such an adventure for our 7 years old. Apparently, the highlight was the pecking Arctic Terns and I was pecked by Cedric for the rest of the day by his finger on my head him pretending to be the Terns.

Billy Shiel’s company were amazing and always on time. They also give a commentary on the Islands, birds and seals on the boat. I would highly recommend them. Visit their website for a variety of trips they provide.

Best time to visit the Islands

The islands are open in spring until autumn time. If seeing the seabird spectacle is your goal, plan your visit between mid-April and late July to see the largest number of birds.

Fluffy white seal pups can be seen on the islands from late October. 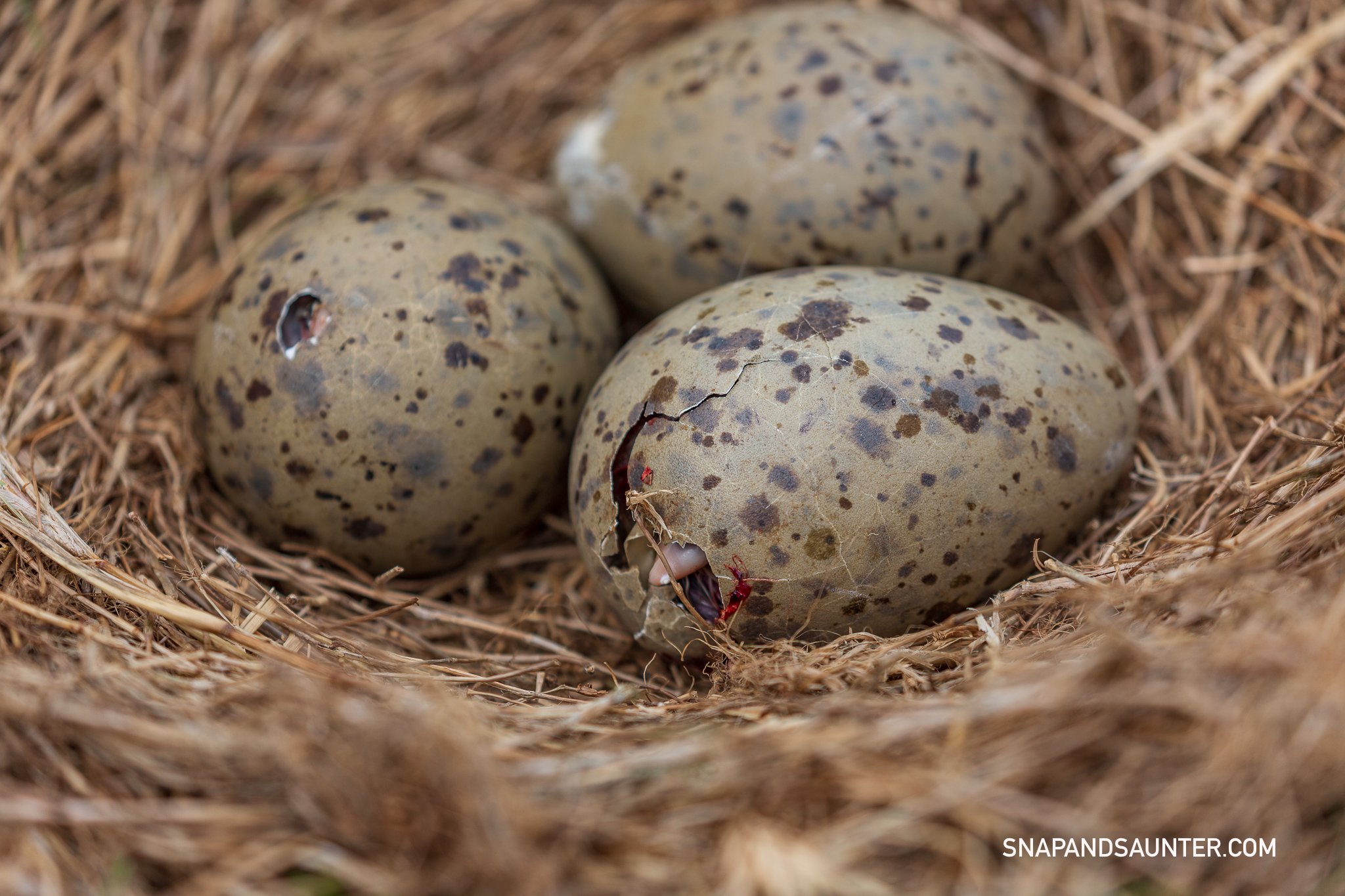 10 Tips for a Trip to Farne Islands

1. Wear a hat! You will get dive-bombed by the Arctic Terns protecting their eggs and chicks.

2.  Wear clothes you will not mind to be pooped on.

3. Sturdy shoes are advisable. It may be a bit slippery.

4. Take a packed lunch including drinks. There are no cafes on the islands.

5. There are no toilets on Staple Islands. Only on Farne Islands.

6. Wrap up warm. It can be surprisingly cold out there, even on a sunny day.

9. Don’t forget your camera and binoculars!

10. Take only memories, leave only footprints.

/p>
Have you been to the Farne Islands or are you planning to go? Let us know in the comments below. We love hearing from you.

I am very worried about this snowman... . . #snowm

Went for a walk today. How beautiful is that? Snoo

A heron sitting high up in a tree. Big birds, hero

“Autumn dresses up in gold, the richest season o

Alone in water. I liked the reflection in the wate

What I Saw at Potteric Carr Nature Reserve, South Yorkshire