We visited the Holy Island of Lindisfarne in Northumberland during the May bank holiday weekend.

After spending a day on the Farne Islands the day before, we were looking forward to another adventure. Another day, another island! But this time, we were not going by boat but crossing its causeway by car.

Lying just a few miles off the Northumberland coast, Holy Island is cut off twice a day from the rest of the world by fast-moving tides. Despite a population of only 180 people and measuring 3 miles from east to west and only 1.5 miles from north to south, it has a lot to offer. Let’s explore.

As I mentioned above, Lindisfarne is a tidal island accessible via a causeway. Do make sure to check the tide times before your crossing each way. Allow at least 30 min extra time and never EVER cross during the rising tide. The causeway is like a normal tarmac road so you can easily drive over.

We parked our car at the main car park and made our way to visit Lindisfarne Castle.

At first sight, Lindisfarne Castle looks as if it has grown naturally out of the rocky outcrop on which it sits. There has been a fort here since the reign of King Henry VIII.

The crown established the fort as part of the defences against Scotland, historically England’s northern foe. However, after the accession of King James VI of Scotland to the English throne, the fort’s importance began to decline. Its guns were only ever fired once in anger, in the civil war.

In 1715  a couple of Jacobite rebels used subterfuge to seize the castle. They expected a Jacobite army to join them. However, this army did not appear and British soldiers quickly retook the castle.

By the end of the 19th century, the soldiers had vacated the fort. After a brief spell as a coastguards station, it lay empty. In 1901 it was discovered by Edwin Hudson, the founder of the Country Life. He employed the architect Edwin Lutyens to transform it into a summer holiday house.

Dramatic and picturesque, the castle intrigued us as soon as we saw it in the distance. From the castle entrance lobby, a flight of steps takes us to the Lower Battery. This is the first of two courtyards.

The castle is partially built into the rock. Therefore we were somewhat surprised to climb the winding staircase inside the castle and emerge in another courtyard. This is the Upper Battery.

It was very windy in there. I could feel the wind under my feet. I thought I would start hovering soon! 🙂

From here there are great views over the surrounding coast. The castle is very solid looking, well suited to its rugged windswept environment.

The National Trust took the castle into its care in 1944. 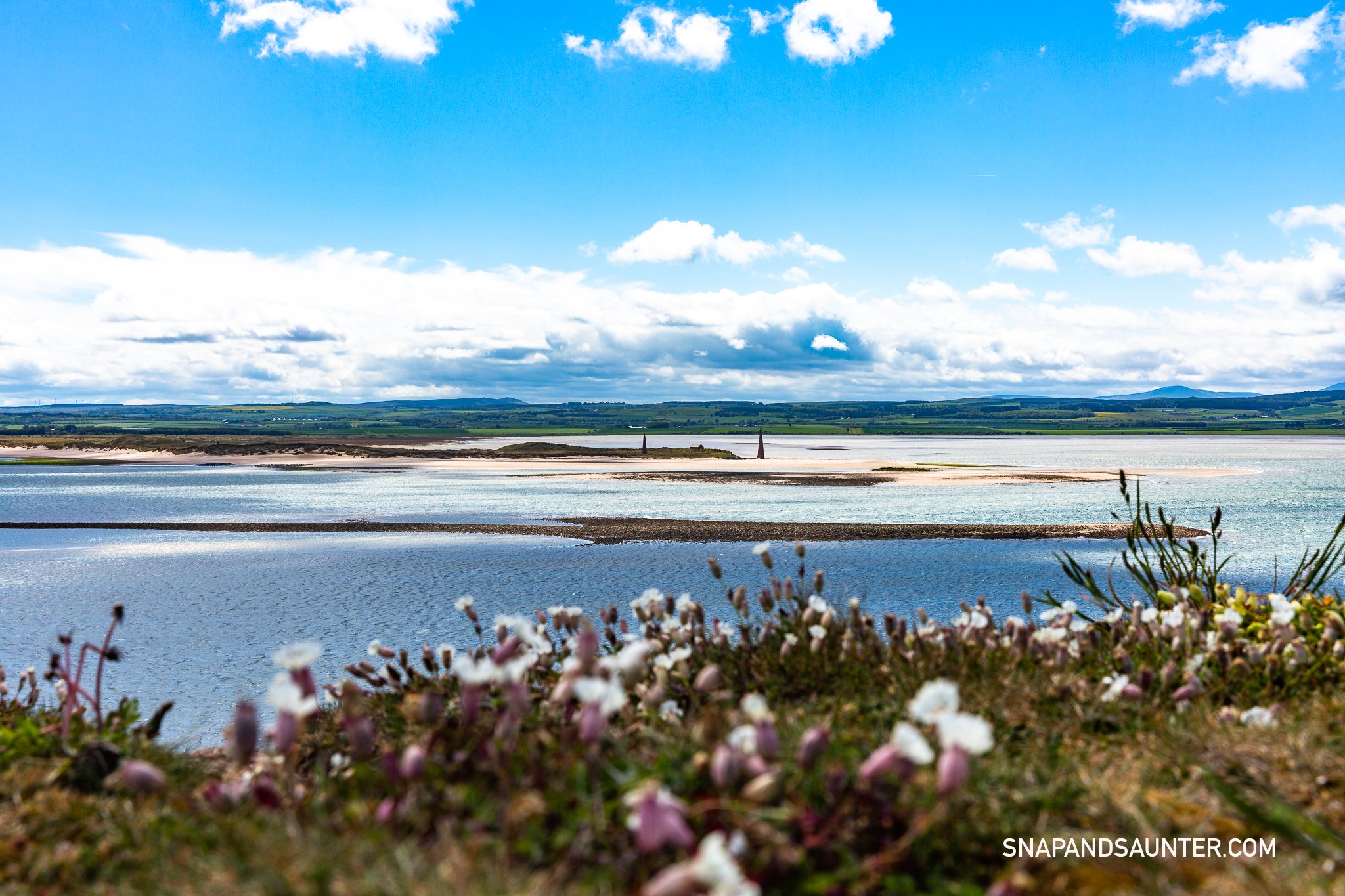 While we were having a picnic after visiting the castle, Cedric was running up and down on the rocks on the hill called Beblowe. This area is the highest point on the island.

In 635 Oswald King of Northumbria asked the Irish monk Aidan to settle at Lindisfarne. A thriving monastic community developed becoming a major centre of Christianity in the region.

Around the 670s a monk called Cuthbert was living at the monastery. He became well known for his wisdom and piety. However monastic life did not suit him and he was drawn to a more secluded life. He moved to Inner Farne Island to live as a hermit,  with the puffins, terns and other sea birds for company.

Despite his attempts to isolate himself his reputation grew. Eventually, he was persuaded to return to Lindisfarne as its bishop. After a few years, he felt his death was approaching and returned to the wildness of Inner Farne. He died on the 20th March 687.

He was buried at Lindisfarne where he was soon venerated as a saint. However, in the latter part of the 9th century, the Vikings raided Lindisfarne, sacking the monastery and killing many of the monks. This was the first Viking attack in Western Europe. The monks left the island to avoid further attacks. They finally settled at Durham.

The monastery on Lindisfarne sank into obscurity and it was not until after the Norman Conquest that is was re-founded as a satellite of Durham Cathedral.  Henry VIII closed the priory at the dissolution of the monasteries. The retained buildings were used to house the naval garrison, now stationed here. Stone from demolished buildings was reused elsewhere, including in the new fort.

The impressive Norman ruins are now managed by English Heritage. The nearby Parish Church of St Mary the Virgin is also worth seeing. It has some fine stained glass and a wooden sculpture of the monks moving St Cuthbert’s body to their new home.

Above and below pictures were taken from the newly restored Lookout Tower. It’s free to visit. You can hide from the wind for a moment and enjoy the stunning 360ºC views over the Bamburgh Castle and the Farne Islands.

Unbelievably, we bumped into our friends from London . Small world!

To end our trip to the Holy Island we headed to Pilgrim’s Coffee House & Roastery which was very good. Highly recommended if you would like to have a nice cup of coffee and a cake.

I am very worried about this snowman... . . #snowm

Went for a walk today. How beautiful is that? Snoo

A heron sitting high up in a tree. Big birds, hero

“Autumn dresses up in gold, the richest season o

Alone in water. I liked the reflection in the wate

A WALK AROUND FLAMBOROUGH HEAD AND LIGHTHOUSE

WHAT TO DO IN NORTHUMBERLAND – 3 DAYS ITINERARY